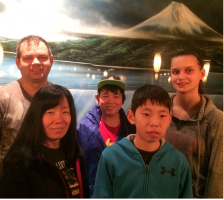 When we arrive at Dallas airport I thought it might be snow but it was snowing... there was snow and we couldn't go to Iowa right away. It was a 6 inch (about 15cm) of snow so the airplane can't fly so we were stack at the airport. I thought we might end up sleeping at the airport until we can catch the next flight. . But we were lucky enough to get a room at a Hotel so we were able to have a rest at a Hotel. We don't have any idea of where we can go in Dallas so on the first day we just rested at the Hotel. But next day Mr.Hadley took us to shopping mall so we were able to go for a shopping and buy presents for my family and my classmates. The shopping mall was too big and there were many favorite shops so it took me about 45 minute to go around 1 time. I got tired when we went around for 3 times. I thought America has everything big and it gave me a negative image sometimes. But I was able to find what I was looking for and presents. Next day we went to a museum and we visited a planetarium. At first it was a good but planetarium was dark naturally so I fell asleep during the presentation. I think I only saw the stars about 4 minutes out of about 15 minutes presentation. But it was fun.

The day we met my host family we woke up about 5:30 because we needed to go to the airport early so that we could get a ticket of airplane so we get up early and we checked in around 6:30. When we arrive at Cedar Rapids airport I was very nervous because I haven't met my host family before and that was my first time. I was a top batter of meeting with my host family so I couldn't see other student's buddy. I was little bit shocked but my buddy talked to me very friendly so my nervousness disappeared very quickly.

At a first and second week we had school and we needed to wake up early to go school. We ate breakfast at school that we can buy food in cafeteria. We did a 6 period of class at first and we had lunch at 12:30 and we did 2 period of classes in the afternoon and we can go home at 3:00. we had more periods of classes than my school in Japan but we can go home earlier than Japan. We went to Air Fix( a place that we can use trampoline) on Wednesday and we did a trampoline basket ball and we did a dank and we did a front and back flip. I could do a front flip but I can't do a back flip. I had a good exercise. We went to movie on our first Saturday. I bought a large size cup that I can take much as I can and I can choose any juice and large size of popcorn. It was so big that I need to use two hands for the popcorn and the cup was too tall. The cup was about 20 cm high. So we watched a movie while eating from a huge size popcorn bucket and drinking from a tall size juice.

At a day we went back to Japan the mode was little bit negative and usually my host buddy's dad would sing a song but he didn't do today. When we arrived at the airport there were classmates and their host families. Everybody was a little bit down mode but at the end everybody make a smile and took a picture. When we arrived at Japan I was very tired because I need to adjust to Japan time so that I can sleep at night in Japan. It was a fun trip and I learned so many things in Iowa and America
トラックバック