I have learned a lot since I came to Iowa, I have seen and tried many new things. I think my host family has learned about Japan as well. I have learned many of their foods are very different, some good, some not as pleasing. I really liked stir fry, Which had chicken, rice and vegetables. I tried black licorice twists, and it taste horrible. And many of the members of my host family found taste bad too. I do not like this gummy candy much.

Yesterday (March 16th), Katie(my host), and her little sister Lexi and I went shopping at the Coral Ridge Mall. We went to a store called "Bath and Body Works" the sales woman put lotion on my hands and Lexis'. Neither of us really liked the smell of the lotion. Lexi immediately washed off her hands and I followed suit. We also got malts (which is like shake). Katie loves ice cream, and ate the most. At OLDNAVY, Lexi and I made a deal. If I tried a sweater that I didn't want to, Lexi will try on a skirt (Lexi hates skirts). It became very funny.

Katie and her little sister Lexi both ride horses. One day, after we came back from horse back riding lesson, they decided to ride their horses down the driveway to the horses pastures. I was given the chance to ride double on Scout, Lexi's horse with her. I was given leg up onto Scout behind Lexi. Going down the driveway was fun but scary. Sometimes Scout would shake his head or snort. It was hard getting off, even with Katie's help.

Katie and I decided to bake a chocolate cakes and bundt cakes which is cupcakes with a hole in the middle. We used more than half of the batter to bake the prototype. When it was made, it disappeared immediately. For the main cupcakes and bundt cakes, we did sprinkles and icing on top of it. It seems yummy and sweet.
I made Japanese food, fried chicken, Karaage and Chirashizushi. It did not turn out to be like the one that my mother makes, but I liked mine too. I also made clear Japanese soup, osuimono and miso soup. I made and a mistake on the quantity of water so it became too salty so too light. It was filled up with problems and mistakes. But my host mother and host father seems they like my awful cooking so I felt better than when I was eating.

In the school, I had a lot of fun, and I made many friends, but I didn't memorize all of the names. I think I remembered about 15-20 students' name. My favorite subject was P.E. and we did hockey and softball. In the hockey game, I saved 3 balls when I was doing a keeper, and I earned 1 point when I was playing a softball. I never done it before but I think I felt most confident in the sports I played ever before. I wish I can play in Japan!

Overall I think the climate of Iowa is quite hard. The day that I arrived was -15 degrees but it was about 18 degrees yesterday. And it is below 10 degrees now. I sometimes wants to have short sleeve shirt but I am feeling cold when I was wearing a sweatshirt today. I will enjoy rest of the day staying at Iowa. My host family was kind! We had 3 weeks (I only had 19 days...) and I felt it was long but it was actually very short! 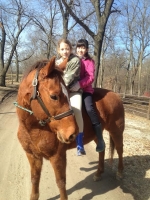